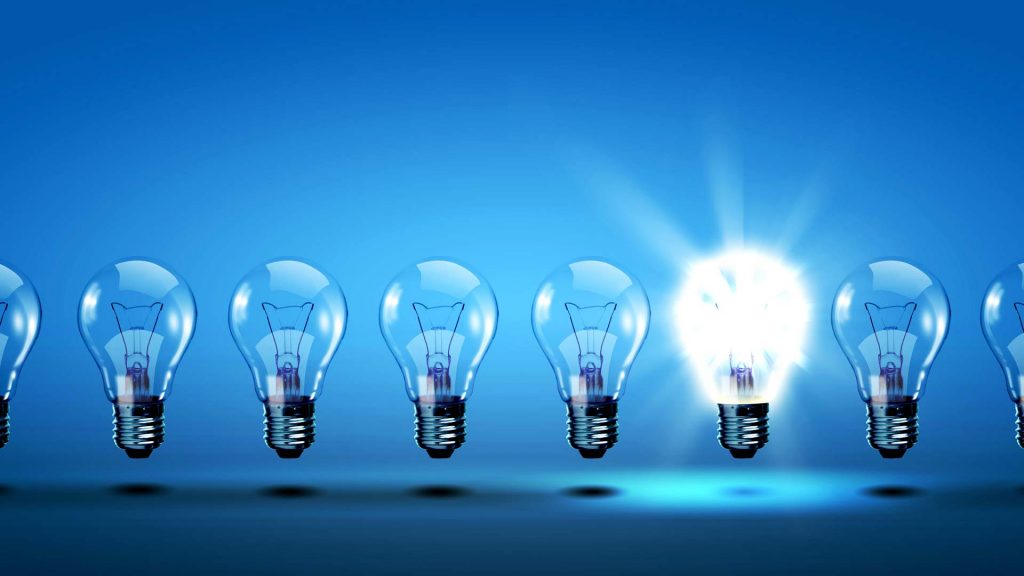 People can be creative without being innovative. Ever met those people who have great ideas but nothing ever actually happens? Innovation , however, produces something demonstrably new. Whether it’s a new product or a new process, innovation brings it into being.

From a business perspective innovation is a primary means by which organizations reinvent and reposition themselves and what they have to offer. Commercially, as someone once said, innovation is the ability to convert ideas into invoices.

However, innovation is also the primary way we as individuals renew ourselves as people: it will ultimately determine the future we create for ourselves as well as our clients. Failure to keep innovating means we become stuck in our present and just keep repeating ourselves. Is that the future you want for yourself or your clients?

Most people aren’t used to thinking of themselves as innovators, But unless you’re the same as you were twenty years ago you must have been making changes.  Some will probably have worked better than others. Some you may have made deliberately: others may have been vague aspirations which have now come to pass even though you haven’t necessarily worked at them. Some may have been big changes, but more often than not they will have been incremental.

And this is important because contrary to the popular myth of the Eureka light bulb moment, an awful lot of innovation is incremental and not particularly dramatic.  This incremental innovation however is cumulatively profound.

Human beings have an amazing ability to habituate to change. When it is incremental this means over time we can experience considerable change but not really notice it: it happens little by little, day by day. (If you’re in any doubt try looking in the mirror as you get older!) So we can have the strange paradox of not really noticing how over time we have gradually changed and even invented new ways of living – including earning a living.

Whether you’re a coach, a team leader, an entrepreneur or someone who wants to be more innovative in their life, it’s important to have an understanding of what actually triggers innovation.

How often have you woken up and thought ‘everything’s perfect so I think I’ll innovate’? The answer is probably: never!

The fact of the matter is that innovation is invariably preceded by discontent. That doesn’t mean people are disgruntled; they may just have a sense that ‘we can do better than this’ but not yet be clear how to. This can be uncomfortable until you figure a better way out. No one enjoys feeling thwarted, frustrated or disappointed, so people often try to ignore or avoid these signals. In so doing they frequently get in their own way and inhibit innovation.

Innovators however are the people who actually use such thoughts and feelings as the spur to new thinking.

Let me give you an example. One day Yvonne von Amerongen, a manager in a nursing home in the Netherlands, was at work when her phone rang:

“My mother called me and told me that my father had passed away suddenly. He just had a heart attack and died. And one of the first things I thought was ‘Thank God he never got to be in a nursing home.’

So in Nov 1992 we sat down in a room and decided to take one day to consider what would make nursing homes worthwhile to live in.” (1)

Fast forward some years and now there is a brand new four acre care complex which houses 152 residents. It has the same budget as any other nursing home in the Netherlands. No more, no less. But it delivers a totally different quality of living. (2)

The most important innovation lesson here is that a potential model of excellence has come into being not through some remote central government initiative, but through one woman confronting the disparity between her personal response to her father’s death and what she was doing professionally. She and her colleagues recognized that for their own peace of mind they needed to do better.

If we have the courage to confront our own discomfort we may just come up with a better way of doing things. On the other hand if we are forever ignoring how things don’t really stack up in our lives, we’ll likely keep repeating what we know in our hearts really isn’t good enough.

So suppose you were to reframe feelings of discomfort and discontent as feedback; an invitation to innovation? Now they become your early warning system. Both individuals and teams can learn to do this. One of my clients now refers to these feelings as his ‘innovation signals’ and says it’s one of the most valuable things he’s got out of our work together.

Innovation frequently happens at the interface between disciplines. For me this is part of its attraction. Over the years I have been involved in a whole variety of collaborative ventures which have enabled me to learn from and innovate with others who have quite different skill sets and fields of expertise.

Whether it’s between disciplines or within just one, almost all innovation involves collaboration. Collaboration is co-labouring, ie. “working with” others. So knowing how to co-labour is a rather important innovation skill.

Collaboration requires a set of core competencies that enable people to work together effectively to achieve what none could accomplish alone. Learning how to collaborate more effectively – be it with clients, colleagues or your nearest and dearest – is critical. And you can.

This is what good leaders make possible. Working with leaders I have found that when they get serious about promoting collaboration they become infinitely more effective.  It is also crucial for entrepreneurs if they are going to thrive. (Why? Because being a one wo/man band limits what you can achieve).

Imagine being able to foster this mind-set in others. When you know how to innovate and collaborate you also have an invaluable skill set you can pass on to clients. Being better able to do this has enormous implications personally, organizationally and commercially.

Much of my own work centres on helping people navigate the various stages of what I call the Innovation Journey. When you know how to help people make this journey you can add extraordinary value.

How neuroscience can support innovation

What we are learning from current neuroscience research has huge implications for promoting innovative thinking. To take just one example it’s much easier to make this journey when people believe they are capable of it.

So much of what we do as leaders, coaches, trainers, managers – and parents! – is affected by how the brain works. This is something I and my colleague Professor of Applied Neuroscience, Patricia Riddell, emphasise in our programmes. Your brain is the driving force behind every thought, memory, emotion and behaviour that you have had or ever will have. So it would be smart to have a basic understanding of how you can work with your brain – and also make sure you’re not working against it.

Specifically when it comes to learning to be more innovative and collaborative it is useful for both teams and individuals to have some rudimentary understanding of the brain’s neuroplasticity. Recent research makes it clear that we have infinitely more potential at any age than previously imagined. People need to know that every human brain – and thus every team – is capable of continually growing and adapting.

“You can’t teach an old dog new tricks.” This is just one of a number of outdated myths about the brain that recent advances in neuroscience have disproved. But too often people are held back by not understanding what their brain – and therefore they – are capable of.

In the past few years the old view of the brain as a fixed asset with regions which could be knocked out has changed dramatically. Neuroplasticity refers to the ability of your brain to literally reorganize itself by forming new neural connections. We now know this happens not just during the early years of life but that you can do this throughout the whole of your life.

This has huge implications for how we understand the potential of individuals and organisations. The converse is also true: living with an outmoded understanding of your brain can stunt your mental and emotional growth – and thus your innovative potential.

So how to begin?

Recently I was asked to demonstrate Innovation Coaching at an international business conference.

One delegate wanted to stimulate more innovative thinking in his team. However, what emerged was that he was way too fond of telling people what to do. He needed to learn a coach approach – drawing out what was there more and advising less. The breakthrough came when he said, “you know, my wife says I tell her rather than talk with her.” We ended with him committing to start innovating when he got home that evening! A new kind of collaboration promised a better marriage – and this would be the basis of better work practice.

Innovation is like charity – it starts at home. So ask yourself where might you want to innovate in your own life?